Power to X and Energy Storage

Are you considering Power to X or battery storage technologies as a way of expanding your business portfolio and increase revenue streams?

Do you have a need to offload excess power production? 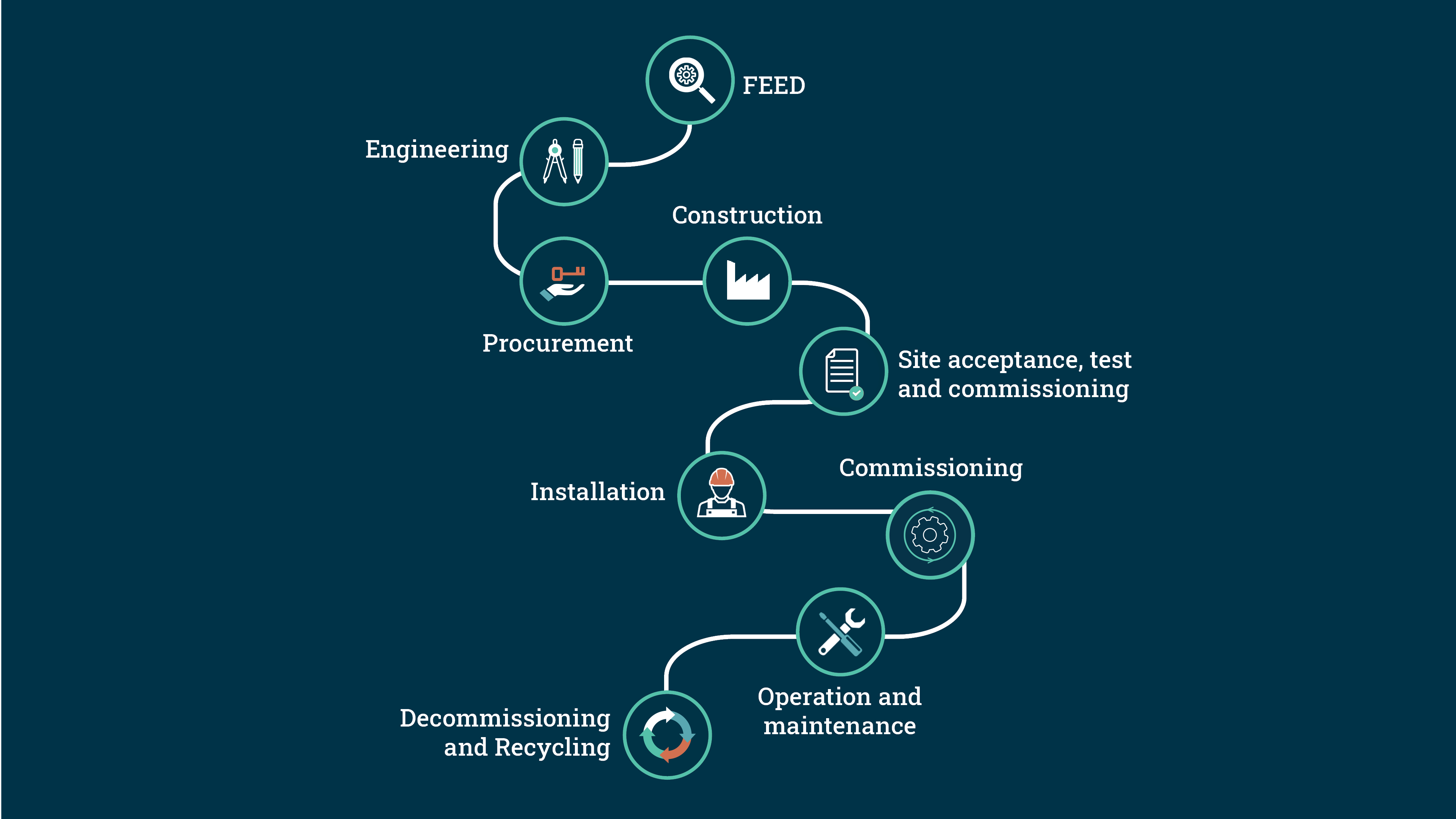 We will challenge you to make sure that you get the most out of your investment!

Our unique offshore and onshore experience combines the latest green technologies with 40 years of experience in Oil & Gas, conventional power plants and transmission systems; putting us in an enviable position to support the market needs.

Our data driven tools support your decision making in the due diligence process of the investment and thereafter in its execution and lifetime operation & maintenance. We help with diversifying and increasing your revenue streams, exploiting the full potential of your initiatives and installations.

The current grids for electricity and gas transmission are buckling, trying to keep up with the exponential development plans in the Green Transition. Potential investors are grappling with guarantees for demand and prices for the offtake. But the gains are huge and you risk missing out! Use our experience to help you make the right and informed decisions.

We solve the puzzle of solutions that can open doors to new business cases focused 100% on applying the latest innovations in Green and Blue Technologies.

Let our partnership inspire and support your initiatives from concept, through the project life cycle, operations and finally to repowering or recycling.

With governments and companies creating strategies to reach net-zero emission by 2050, and some much earlier, the decarbonization of the energy supply has become crucial. The performance and capacity of renewable energy sources increase - and energy sources wind and solar are being pushed & developed exponentially.

When these sources cannot keep up with the expected demand and when the capacity & production of the current renewable sources begin to experience difficulties in selling their offtake, i.e. insufficient immediate consumption, solutions need to be developed. Greenfield alternatives need to be developed and built to cover the capacity demand and to store or convert overproduction into another energy form.

Hydrogen & Ammonia and Battery Storage are now the hottest technologies being discussed and implemented as key aspects within governmental decarbonization strategies. Other technologies using various salts and chemicals are being investigated and tested for consumption suitability and economic viability.

Projects such as energy islands which were initially met with scepticism are now being actively bid for by large energy organisations. Initiatives are already in place with projects approved in Germany, Holland and Denmark. Many soon to follow.

Ammonia is produced by a synthesis, by catalytically reacting and thereby combining molecules of nitrogen(N2) and hydrogen(H2) to produce NH3. A process referred to as the Haber-Bosch process.

The advantages and disadvantages of using either hydrogen or ammonia as fuels in aviation, land & maritime vehicles(vessels) are heavily debated with reference to efficiency, usage of existing infrastructure, calorific values, storage & transport conditions, proximity between production and consumption sites. Many initiatives are in place to investigate how existing oil & gas infrastructure can be used to transport and distribute these new fuels. Studies show also potential in using existing oil & gas rigs to farm hydrogen, while others try to investigate how existing conventional power plants, ships and large land vehicles can be slightly modified to consume these new fuels.

Renewable energy sources in the grid are drastically reducing the CO2 emissions of our grid, but their fluctuation can lead to stability and availability challenges. battery Energy Storage systems are a versatile scalable and flexible and effective way of reducing the stress, the congestion and the voltage and frequency drops that our grids are facing nowadays.

The most common and versatile battery energy system. The most efficient way to store electricity. Their fast response allows to use them both in energy application but most of all in power application, for example operating in the ancillary service markets. This allows to have several revenue stacks and a low payback time of the asset.

The higher longevity and lower Levelized Cost of Storage (LCOS) and lower energy density makes them ideal for stationary application where the main aim is to reduce the CO2 emissions displacing high amount of energy over time.

Our offerings in Power to X

Our AI tools, engineering skills, 40 years of experience and data driven analytical skills employ the latest skills and technologies to serve your needs across our range of services and products. No task is too small nor too big.

Our feasibility studies will unfold a suite of technical options and concepts which would provide tangible input to the financial modelling of the business decision process to complete investment case justifications for energy grids, battery storage, power to X facilities.

Services consists of but not limited to:

Our robust, skilled and experienced toolbox puts us in a leading position to provide Complete Engineering Design, Procurement & Supply Chain Management; and Construction & Commissioning for the entire facility.

We can package all of this in a neat turnkey package, providing the customer with a low risk investment knowing that the project lies in good hands. We urge you to ask our customers in the Oil & Gas and Renewable sectors on what they think of our deliveries.

Once the facility is commissioned, the investment needs a robust asset management throughout its lifetime to ensure continued high returns on your investment. Our efficient planning and multi-skilled service technicians and asset management teams secure maximum uptime and lowest maintenance costs.

Our AI based software allows predictive maintenance and maximum utilization of your asset, creating new revenue streams with no additional effort from the customer.
Our state of the art operation & maintenance packages are modular and therefore can be configured to your specific needs.

When the time comes where the asset is required to be decommissioned, whether by law or economics, we will be there to support too.

Contact us and learn more about how we can support your business: Get the people you need ...